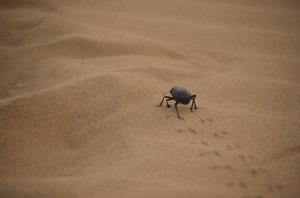 Broccoli was just a young beetle but he knew the way the world was.

He lived under the fence behind the playground and what he wanted more than anything was to cross the big white sidewalk and see the view beyond the schoolhouse.

But sidewalks were dangerous.

They were filled with feet. Stepping, walking, running, jumping.

Broccoli had heard about the beetles who stepped out onto the sidewalk and never returned. Some, maybe, were exploring the lands beyond the schoolhouse.

He’d heard there were trees out there. Big ones great for climbing and smaller ones with leaves perfect for munching.

But he knew about the squishing too. About all the beetles who didn’t make it. And he was afraid.

One day, his best friend Asparagus came to tell Broccoli that he’d made up his mind. That day, after the kids went home from school, he was going to do it. He was going to cross the great big sidewalk and see the lands beyond the schoolhouse for himself.

Broccoli couldn’t believe it. As much as he wanted to join his friend, he felt paralyzed. All he could think of were shoes. Running shoes. Flip flops. Dress shoes. Boots!

And so it was that Asparagus turned back one last time and waved an antennae at Broccoli before he drifted out of view.

Broccoli couldn’t sleep that night. He climbed his way to the top of the fence hoping for a glimpse of the far side of the sidewalk. He looked as hard as he could, straining to see if any of the specks looked like his friend Asparagus, but he couldn’t tell. What he did see was a bright green leaf drifting through the air and down past the schoolhouse.

Broccoli swallowed hard. He blinked his eyes and climbed back down the fence. It was daylight now and he heard cars and buses pulling up as they did every day. Slowly, he made his way towards the sidewalk.

His heart was pounding but it was still quiet near the playground. So he took a step forward. And then another. He was nearly half way across when it happened. Shoes. Footsteps. Two big and two small.

He heard the big shoes squeal. “Ew, a bug!” They were high heels. Spikey and terrifying. But the smaller shoes, yellow sandals with purple butterflies on the strap, sounded different.

A giant face with bright blue eyes bent down towards Broccoli. He stopped moving. He could barely breathe. But then the yellow sandals spoke again. “It’s a little green beetle, mom. Look, he’s cute.”

“Bugs are NOT cute, Jenny,” the spikey heels answered. “Well I think he’s cute,” said the sandals. “And we’re outside in his home. Maybe he’s on his way to beetle school.” The spikey heels sighed. “Someone needs to get to school alright,” they said, more softly this time.

And they stepped around him. Broccoli could not believe it. He hadn’t been squished! And what was more, he could see the other side of the sidewalk! He moved forward, his heart bursting with joy.

He was an adventure beetle now. A beetle brave, on his way to climbing trees and munching leaves. He’d find his friend Asparagus and together they’d discover all the possibilities the great wide world had to offer.

These books are not yet published. Interested in publishing or illustrating? Email amy@soulbeaststudios.com!

All content on this site is the property of Soulbeast Studios. No works or content may be copied, adapted or otherwise reproduced without the explicit permission of the author.